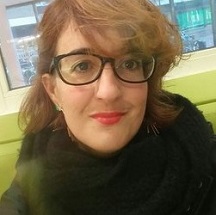 María Pérez Zabalza received the MSc in Telecommunication Engineering from the Public University of Navarre (UPNA), Spain, in 1999. After working for 6 years as software engineer in different private companies in Navarre, Madrid and Barcelona, she studied the Master Degree in Biomedical Engineering from the Polytechnic University of Catalonia (UPC), Barcelona. As a result of this, in 2005, she started her career as a researcher in the Institute Guttmann – Neurorehabilitation Hospital, Barcelona, performing, analysing and studying multichannel surface electromyography (sEMG) of patients with incomplete spinal cord injury. In 2008 she started her PhD studies in Neuroscience at the University of Barcelona under the supervision of Dr. Maria Victoria Sanchez (Idibaps, Barcelona) and Dr. Maurizio Mattia (Istituto Superiore di Sanita, Rome), finishing in 2013. Her thesis work focused on the study and mathematical analysis of brain signals to understand the mechanisms that modulate a specific brain rhythm, and their possible alterations triggered by different types of pathologies. In September of 2016, she got a postdoc position at the Engineering Fluid Dynamics department at the University of Twente (Netherlands). For two years she studied different biomedical signals to investigate mechanisms of action of High Flow Therapy and the physiological impact on respiratory mechanics, to find possible Biomarkers which help clinicians deliver this technique in a more optimal and efficient way.

In vivo and in vitro cardiac aging: developing of cellular aging models Conferencia

Proceedings of the XLVII International Conference on Computing in Cardiology, Rimini, Italy, 2020.