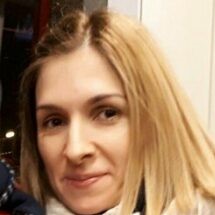 Esther Pueyo received the M.S. degree in Mathematics from the University of Zaragoza, Spain, in 1999. During 2000, she was a research student at the Department of Mathematics, University of Zaragoza, where she developed a minor thesis in the field of Calculus, supervised by Prof. José Garay. In 2001 she started her Ph.D. studies in Biomedical Engineering at the University of Zaragoza under the supervision of Prof. Pablo Laguna, with a grant supported by the Spanish government. Her Ph.D. studies aimed at developing signal processing techniques applied to the electrocardiogram with the purpose of investigating conditions predisposing to suffer cardiac arrhythmias. During that time, she also worked as an Assistant Professor of Signal Processing at the Department of Electronic Engineering and Communications and she was a visiting scholar at research centers in Portugal, Argentina and UK, with long research visits at St. George’s Hospital Medical School, London, UK, where she worked under the supervision of Prof. Marek Malik.

After finishing her PhD in December 2006, she moved to the University of Oxford, UK (2007-2009) to get postdoctoral training in computational modeling and simulation of cardiac electrophysiology. She worked with Dr. Blanca Rodríguez and Prof. Kevin Burrage in the construction of cell and tissue models to investigate cardiac pathologies and drug-induced effects associated with increased arrhythmic risk. Most of the studies conducted during her postdoctoral period involved collaborations with experts in cardiology and experimental physiology, mainly from Hungary, UK and Sweden.

In January 2011 she was appointed Associate Professor at the University of Zaragoza, Spain. During 2012-2015 she worked as Senior Researcher at the Biomedical Research Networking Center in Bioengineering, Biomaterials and Nanomedicine (CIBER-BBN) after having been awarded with a ‘Ramón y Cajal’ Senior Research fellowship by the Spanish government. At the University of Zaragoza and CIBER-BBN, she works with a group of postdoctoral researchers and PhD, MSc and undergraduate students in the development of methodologies for the analysis of simulated, experimental and clinical data. By combining ECG signal processing and electrophysiological modeling and simulation tools, her current research aims at shedding light on the mechanisms and manifestations of cardiac arrhythmias at scales ranging from cellular ion channels to the electrocardiogram and on the role of important modulators such as the Autonomic Nervous System.

Since October 2015 she is back to her Associate Professor position at the University of Zaragoza. She has participated as Principal Investigator and as Collaborator in different international, European, national and regional research projects. She is currently PI of the ERC Starting Grant project MODELAGE, funded with 1.5 M€, in which a systems biology approach is used to investigate the aging of the human heart.

Prevention of sudden death in sports: a global and multidisciplinary observatory for scientific research and knowledge transfer Artículo de revista

En: Computers in Biology and Medicine, In press, 2022.

Proceedings of the 37th Conference on Design of Circuits and Integrated Systems, Pamplona, Spain, 2022.