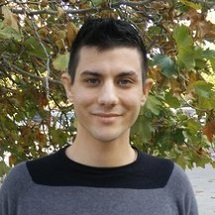 His postdoctoral training began at Aragon Institute of Engineering Research (I3A) of UNIZAR (July 2015 – December 2016), where he worked as Junior Postdoctoral Researcher in different applications of the methods that he developed during his Ph.D. Then, he joined the Department of Electrical Engineering of KU Leuven, Leuven, Belgium, where he worked as a Postdoctoral Researcher (January 2017 – October 2017) in biomedical signal processing in different scenarios, including wearable devices. He was granted with a European Union’s H2020 Marie Skłodowska-Curie actions (MSCA) Individual Fellowship – Global Fellowship, for developing a project entitled “Wearable Cardiorespiratory Monitor (WECARMON)” whose objective was to develop a wearable device for monitoring patients with different cardiorespiratory diseases. This project included a 24-months phase at University of Connecticut (UCONN) (Storrs CT, USA) followed by a 12-months phase at UNIZAR. Thus, he joined the Department of BME of UCONN (October 2017 – November 2019), and subsequently he joined the I3A of UNIZAR (November 2019 – December 2020).

Since then, he has been an Assistant Professor (Profesor Ayudante Doctor) at the Department of Computer Science and Systems Engineering of UNIZAR, and a researcher at the I3A. His current research interests include the development of signal processing techniques for diagnosing and/or monitoring cardiorespiratory patients, aiming to a more personalized treatment and an improved prognosis, with its both social and economic advantages.

En: Computers in Biology and Medicine, 2023.