Atrial Signals 2021: Modeling the aging of the heart

Cardiovascular diseases (CVDs) are responsible for more than four million deaths per year in Europe. The single major risk factor for CVD is age, which leads to a progressive decline in the physiological functions of the body, with very notable effects on the heart. These effects are associated with enhanced predisposition to cardiac arrhythmias.

In this presentation, integrative approaches combining in silico modeling with in vitro cell and tissue analysis and in vivo electrocardiographic evaluation will be presented. Manifestations of aging at scales ranging from the sub-cellular level to the body surface electrocardiogram will be presented. The role of structural and autonomic remodeling in contributing to age-induced alterations and increased arrhythmic risk will be shown.

The electrical activity of the heart is the result of a set of complex nonlinear biophysical and biochemical processes occurring at different scales within the cardiac tissue. The variability arising from these processes translates into variability at the cell, tissue, organ and whole-body levels. The importance of investigating variability in cardiac electrical activity, in general, and in cardiac repolarization (i.e. the return of cells to their resting state after electrical activation), in particular, has been well documented, having shown value for diagnosis, monitoring and treatment of cardiac diseases.

In this talk, she presents studies combining computational, experimental and clinical methods to investigate temporal and spatial variability in cardiac repolarization. She shows the role of stochasticity in contributing to this variability in health and diseased hearts. The link between enhanced repolarization variability and pro-arrhythmia will be described, with emphasis on the role of the autonomic nervous system as a modulator of this link. 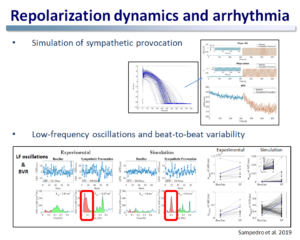 Mathematics course for your defense

The mathematics of the heart

Cardiovascular diseases represent the first cause of death in Europe. The way the cardiovascular system, and particularly the heart, have been investigated so far is remarkably changing. Mathematics, together with other disciplines like physics and engineering, are ever more being used to help in the prevention, diagnosis and treatment of cardiovascular diseases.

In this talk, Esther Pueyo describes how mathematics can be key to understand the function of the heart. She shows examples where mathematical modeling and numerical simulation have been combined with clinical and experimental research to derive novel tools that can be used by cardiologists to improve decision-making. Additionally, she shows how mathematical methods can be integrated into the construction of personalized digital hearts to have virtual replicas where to test novel therapies or to be used for the prediction of abnormal cardiac behavior.