The BSICoS Group researchers, Spyridon Kontaxis y Konstantinos Mountris, participated in the 43rd Annual International Conference of the IEEE Engineering in Medicine & Biology Society. It was held virtually from October 31 to November 4

The present study investigates the differences in autonomic nervous system (ANS) function and stress response between patients with major depressive disorder (MDD) and healthy subjects by measuring changes in ANS biomarkers. ANS-related parameters are derived from various biosignals during a mental stress protocol consisting of a basal, stress, and recovery phase.

The feature set consists of ANS biomarkers such as the heart rate (HR) derived from the electrocardiogram, the respiratory rate derived from the respiration signal, vascular parameters obtained from a model-based photoplethysmographic pulse waveform analysis, and cardiorespiratory coupling indices derived from the joint analysis of the heart rate variability (HRV) and respiratory signals. In particular, linear cardiorespiratory interactions are quantified by means of time-frequency coherence, while interactions of quadratic nonlinear nature between HRV and respiration are quantified by means of real wavelet biphase.

The intra-subject difference of a feature value between two phases of the protocol, the so-called autonomic reactivity, is considered as an ANS biomarker as well. The performance of ANS biomarkers on discriminating MDD patients is evaluated using a classification pipeline. The results show that the most discriminative ANS biomarkers are related with differences in HR and autonomic reactivity of both vascular and nonlinear cardiorespiratory coupling indices.

Differences in autonomic reactivity imply that MDD and healthy subjects differ in their ability to cope with stress. Considering only HR and vascular characteristics a linear support-vector machine classifier yields to accuracy 72.5% and F1-score 73.2%. However, taking into account the nonlinear cardiorespiratory coupling indices, the classification performance improves, yielding to accuracy 77.5% and F1-score 78.0%. Thus, changes in the nonlinear properties of the cardiorespiratory system during stress may yield additional information. 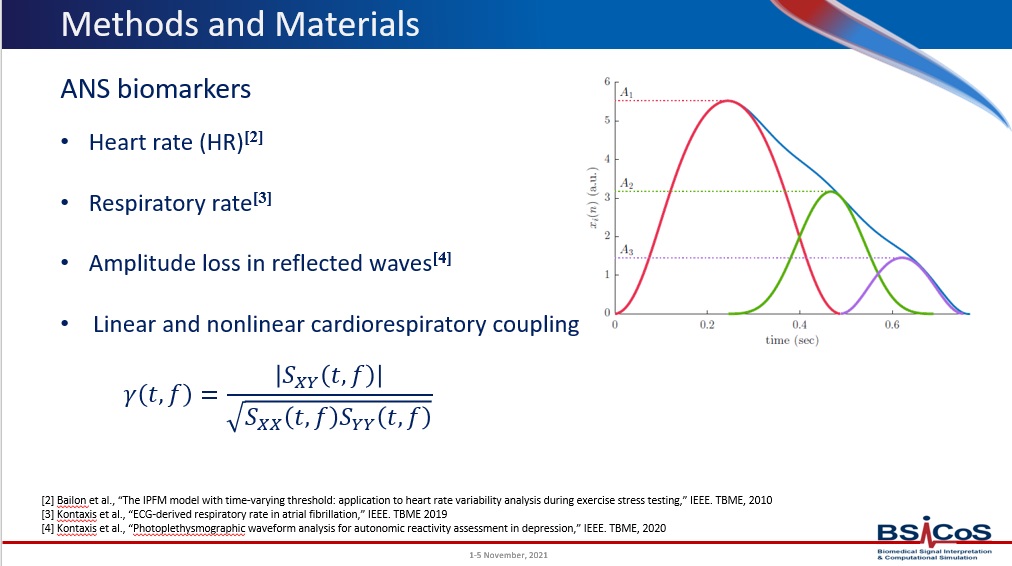 State-of-the-art solvers for in silico cardiac electrophysiology employ the Finite Element Method to solve complex anatomical models. While this is a robust and accurate technique, it requires a high-quality mesh to prevent its accuracy from being severely deteriorated. The generation of a good quality mesh for realistic anatomical models can be very time-consuming, making the translation to the clinics challenging, especially if we try to use patient-specific geometries.

Aiming to tackle this challenge, we propose an image-based model generation approach based on the meshfree Mixed Collocation Method. The flexibility provided by this method during model generation allows building meshfree models directly from the image data in an automatic procedure. Furthermore, this approach allows interpreting the simulation results directly in the voxel coordinates system of the image.

We simulate electrical propagation in a porcine biventricular model with the proposed method and we compare the results with those obtained using the Finite Element Method. We conclude that the proposed method can generate results that are in good agreement with the Finite Element Method solution, alleviating the requirement of a mesh and user-input during modeling with only minimum efficiency overhead. 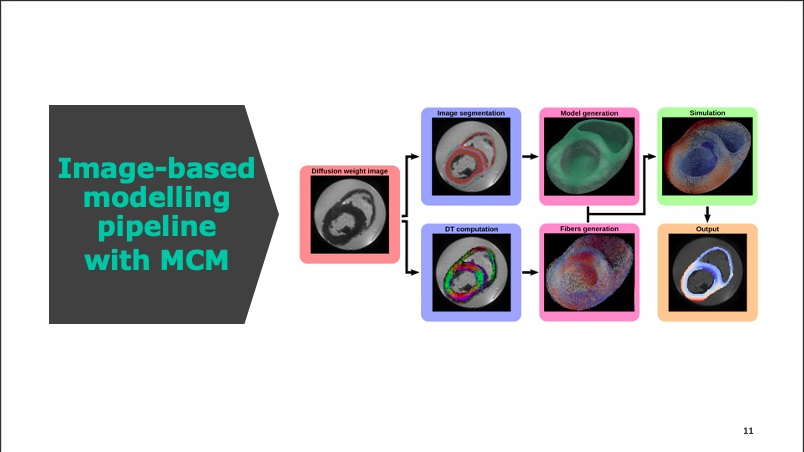